2015 is a big year for Singapore, celebrating its 50th birthday as an independent nation. As a sort of sign, maybe that of the start of a new era, the city-state mourns the passing away of its beloved founding father, Mr Lee Kuan Yew. A great lot of content has been written on LKY in the local and international press, and I am in no position to better analyse than those who have been following the development of Singapore and its main Man and his impact on the Singaporean, regional and international scenes. However, as an expatriate living for 5 years in the city state, whom likes to think of himself as a good observer, I feel like giving my honest opinion on the regretted leader, its legacy, and how Singapore can move forward.

Like many others, locals and foreigners alike, I am grateful for what Lee Kuan Yew has sparked in Singapore. The countless message of condolences all could witness in the streets and on the media were just mind boggling, and everyone seemed unanimous to say that a fierce and truly extraordinary leader had just passed.
There were also articles that were more critical of LKY and his methods. Immediately, the authors of these articles were lashed on, not so much by the government, but by the citizens, calling these people disrespectful, national traitors, and more… Mr Lee Kuan Yew probably had a good heart deep inside, since he cared for his fellow citizens, but in a state where most of the media is in the government ‘s hands, one must be wary of the fine line between a rightful celebration and the excess of turning LKY in a sort of god-like figure.
One can have immense respect for the results delivered by LKY, but also recognize the man’s flaws. He was human, and humans are imperfect. I guess that the emotion was so strong that some people just cannot hear criticism in those times of mourning.
As a matter of fact, if he had been perfect, he probably would not have achieved all he did. Like good ol’ Winston Churchill once said:

“You do not make an omelette without breaking eggs” would be another way to put it…
Does the end justifies the means? It is a philosophical question, and one I believe we will never find a definite answer, for life and society keep moving on. One thing is for sure: the end certainly requires the means.
LKY certainly stood up for something: his vision of Singapore. And he delivered with the help of an inspired group of people and the work and determination of Singaporeans. Great vision always make collateral damages. Although some opponents were shut and oppressed, there were no execution and, besides the 1969 Race Riots, not bloodshed on the path of Singapore progress in the last 50 years…

Singapore found inspiration around the world and imported the best practices for 50 years. Today, Singapore as a nation, holds an impressive score board and a top ranking in many global lists: GDP, ease of doing business, health care quality, education, etc… Now, what can you benchmark when you are basically on top almost everywhere?

It is probably the biggest challenge Singapore will have to face in the coming years. Finding a way to more growth, not only economically, but a society, as a population. Many agree to say that now is the time for Singapore to show that it can innovate on its own and re-invent itself.

For whatever it might be worth, here is my humble, little

Republican principles should be applied to the fullest, with free, unbiased election,.

Conversations need to be open and press should be freed. The government needs to trust its good citizens to make their own opinion and the right choices for the future. No more lethal taxes on opinionated blogs to indirectly close them down. No jailing of young & silly YouTuber’s.
Enforce decent human right policies for immigrant workers, and measures to safeguard social cohesion, racial harmony
Try to cool down the incredibly competitive, kiasu as locals would put it, education system. Singapore needs more creative and multi-faceted people for innovating.
More benches and water features in parks, and turn unused green state properties into more parks before they are auctioned to real estate developers.
More pedestrian-only streets and spaces, at least during the weekends, allowing pop-up stands, flea markets to take place. Every one likes roads without congestion, but people also enjoy their streets.
Re-allow shisha smoking: I really don’t understand the double standards here.
Why prohibiting, on one hand, willing adults to get together to smoke an apple-flavored tobacco, and on the other hand, let people burn piles of fake money all around town to feed the hungry ghosts tradition, generating heavy smokes impacting everyone’s health, from children to elders, willing or not?
Last but not least, Singapore should fully endorse, on the political stage, the same role of regional thought leader and influencer, as it holds on the economical stage. And demonstrate a more humanitarian approach and involvement into regional social and environment issues (Rohingya’s persecution in Myanmar, haze in Indonesia, rampant political corruption in Malaysia, money laundering in the re
gion, etc…). Too often, you could be under the impression that Singapore takes a passive stance on these questions solely to protect economic interests. Is money all that really matters when you are already one of the richest nation on earth? Surely, you don’t want to be considered the Scrooge Mc Duck of all the world’s nations. And well, this is not only the government’s responsibility. This is where a free-thinking, mature, first world population, in a democratic society, should be able to seek more objective and thorough information, and be able to express its concerns publicly.

No place in the world is perfect, but I have to admit that the Singapore that LKY founded easily ranks among the very best, and I am sincerely grateful to be given the opportunity to live and work here, so I would like to conclude with a big

for showing that there is sustainable value for a society in the values of integrity, transparency, and hard work.
for igniting the building of a courteous, prosperous and forward-thinking nation where citizens and foreigners alike feel the necessity and drive for continuous growth, and the means to pursue personal and collective ambitions. 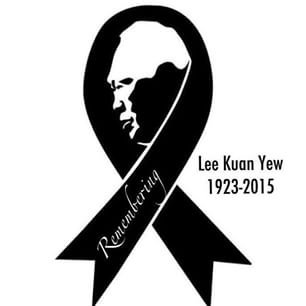