House of Cards is an American political/thriller series starring Kevin Spacey as congressman Francis Underwood. It follows Underwood and his wife Claire, portrayed by the gorgeous Robin Wright, in their quest for power in the first two seasons, and his exercise of power thereafter. For Underwood, the end totally justifies the means, and he’s not afraid to get his own hands dirty. Although Spacey’s character becomes increasingly cynical, ruthless, and overall terrifying as the story goes on, some of his quotes, usually given as asides, are worth remembering and reflecting on… 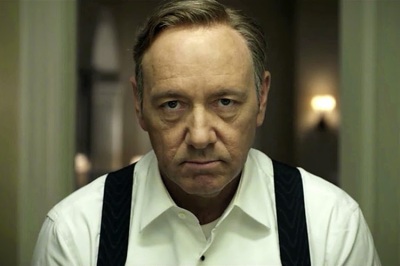 “For those who want to be on the top of the chain, there has and will never be but only one rule: hunt or be hunted”

“The higher the mountain, the more treacherous the path.”

The highly anticipated Season 3 has now aired on February 28th, in an innovative 10-episodes-in-a-row marathon format…

Some great quotes from Season 3

“What’s the face of a coward? The back of his head as he runs from the battle.”

“There can’t be a yes after a no, without a “maybe” in between.”

“No writer with his soul could resist a good story, just as no politician can’t resist making promises he can’t keep”

“My decision… Sometimes I think the presidency is the illusion of choice.”

What are your favourite quotes from House of Cards?
or in the area of strategy and politics?